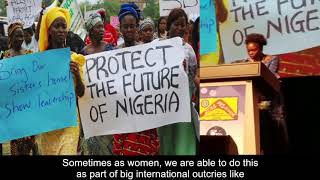 I think I came naturally to resisting because my mother, Uzo, is an up stander. She is ready to fight for those she loves, in every situation, without pause or hesitation. And perhaps because my mother had my back and that of those I cared about, I didn’t

have to spend too much time in that arena. With the home front covered, I am able to resist injustice in solidarity with everyone outside her generous net, including complete strangers.

But it makes me wonder where her resistance came from. Was it her own mother Mercy, who was widowed during the genocide of the Nigerian civil war, and left with six children – my mother, her oldest child still only in her teens? They banded together for the family, Uzo and Mercy starting a wartime business trading with any authority available on the Biafran side. Connections through this supply work meant they had first access to the Red Cross packages, and commerce that would make it more likely that all seven mouths would be fed as they resisted the Nigerian army.

As for my grandmother Mercy, relatively meek and obedient in her marriage with my grandfather until his death - did she learn to resist from her own mother Akwom? At the turn of the century Akwom was a Prison warden - doing a white man’s job in a colonial country still deep in its own old identities, and resisting the tyranny and cultural shifts of British rule. Did grandmother Mercy learn from great grandmother Akwom – who was worried that her two children would create poor odds for a legacy of grandchildren. So resisting the limitation of her womb, she mined a rare matriarchal tradition and married her own wives, to bear children with her son’s last name. For her, the priority was clear – she wanted to make sure her spirit, if not her blood, would be the thing that carried on through the generations.

I’m grateful that a resistor like myself received both. I won’t ever be sure of the source of our resistance, but it is a legacy I will do my best to pass down to my daughters, and theirs – whether they be daughters that spring from my flesh, or distant figures inspired by any useful pieces of my own history left behind in decades to come.

* RESISTOR - noun re·sis·tor \ri-ˈzis-tər\ : a resistance device used in a circuit for protection, operation, or control.